So this is Christmas,

And what have you done?

I’ll tell you what I’ve done. While working to make my PDA act as a USB host, the easiest way to test my success was to have the PDA access a flash drive. It doesn’t take much to consider putting Christmas songs onto that flash drive, and then have mplayer on the PDA play them. So I did just that. The end result is kind of neat, but also convoluted. 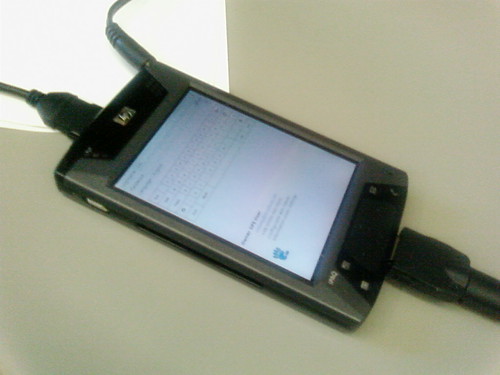 And the flash drive containing the tunes, plugged into the PDA: 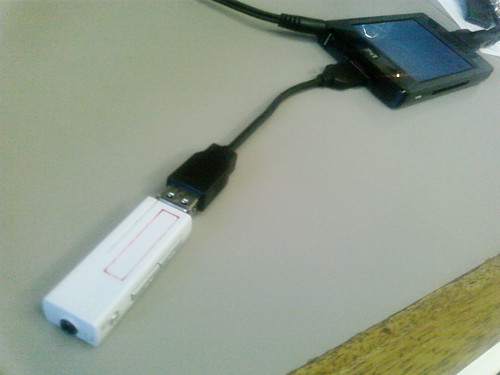 The USB connector on this thing can power small devices, such as pen drives, etc. It even powers up and recognises my Microsoft Intellimouse, but the UI isn’t designed to work with such a device. Bear in mind this is Linux, and you could compile support for pretty much anything that’s in the x86 kernel.

The cable attached to the bottom edge of the PDA provides a serial link to let me watch kernel messages or, when fully booted, allow me to login. However, I work primarily on my laptop, and that’s new and shiny enough to not include a serial port. So the serial link connects the PDA to this guy instead: 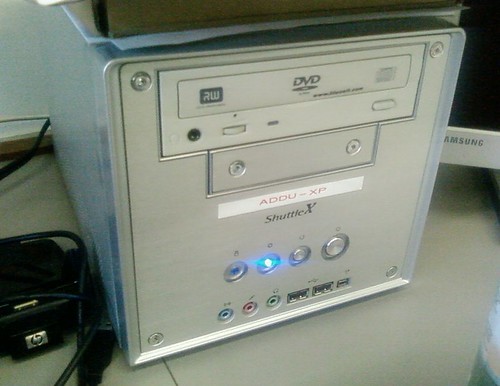 But why have two keyboard cluttering my (admittedly sizeable) desk space when one means a lot less moving around? The desktop machine is naturally controlled by my laptop via ssh, allowing the desktop’s keyboard to collect even more dust: 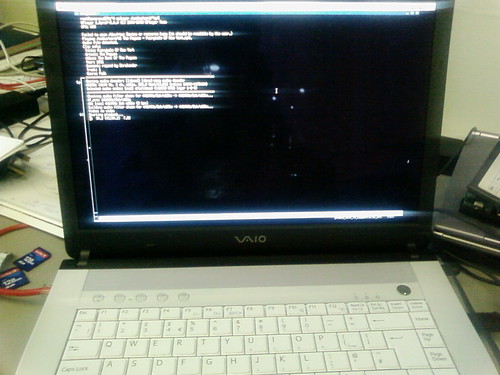 Finally, to avoid tinny-speaker syndrome, the standard small audio jack from the PDA winds up and connects to the office amplifier:

Given that I already had to compile USB host support for the PDA, and that the natural solution for testing is to try a flash drive, the additional effort involved in getting festive tunes to play off that drive was so minimal that this doesn’t even qualify as procrastination.

And so this is Christmas, I hope you have fun.